Sarah Marks lives in Bristol.  One night in September 2019 she went along to see an Educate the Kids event in Portishead that would change her life… 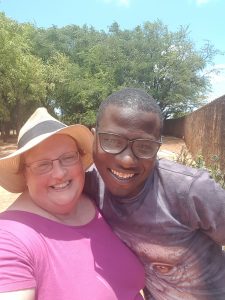 Sarah Marks lives in Bristol.  One night in September 2019 she went along to see an event in Portishead that would change her life…

“My friend’s son and daughter sing in a choir and they were due to be performing with this touring party called the ‘Singing Children of Africa,’ so I went to support them. It was a rainy night in Portishead in September 2019 and my life was never the same.

“I saw these kids performing … oh man, they were amazing, so smiley, such energetic, wonderful performers, brilliant soloists and great dance routines!  I was hooked. Then a lady called Christine Seddon got up and talked about the charity called Educate the Kids that had organised these African kids coming across here and told us a bit more about what they do for them.”

The next month, Sarah’s father died.  She was distraught.

“My heart was broken when my dad died.  I was so sad, but as I got involved with Educate the Kids the children filled my life up with love again, more than I could ever have imagined.

“I was introduced to Tanya Marriot, a local shoe-shop owner, who told us about her trips to Kenya to give shoes to the kids. Tanya was organising her sixth trip to Kenya for the first few months of 2020.  Her 14-year old son did a presentation about their visit to Kenya.  I came away from that evening having sponsored a child and arranged to meet Tanya about going to Kenya. I went in March, just as Covid was starting to dominate the news and returned home ten days before we were all locked down here.

“I’d never been to Africa before. It’s colourful, the people are so friendly but it’s chaotic and loud. I remember driving out of Mombasa airport, where a new road was being built.   Health and safety was conspicuous by its absence and most of the drivers had no road sense.  I thought, ‘what have I come into?!’  It was nothing like I’d imagined.

“I stayed at a hotel on the beach near the village. My first experience of the school was when I went to the kindergarten. We got a taxi to the school and, for the first time, I saw the poverty that permeates the area –  the people living in shacks and the barefoot children.  When we got to the school, the kids were at playtime but we got a lovely welcome. I met Natasha, the girl I sponsor: she was very shy, but she warmed to me and we gave each other a cuddle.  These tiny, beaming children sang “If you’re happy and you know it clap your hands,” and it seemed so incongruous, given the conditions in which they live. The teaching staff were really welcoming too. I discovered that a lot of the teachers had received their education at the school and they are now giving back to the charity that helped them, even though they could earn more elsewhere. For me, this was amazing.  I’ve worked with charities before, but this was passion on a differentlevel compared to anything I’d seen. I was blown away that first day.

“The following day we went to the primary school. It was very similar with the teachers being really welcoming, telling us, ‘come in, say hello,’ then the kids all stood up and said good morning.  I had watched the new Primary School being built by keeping up with the ETK posts on Facebook and now I was able to see it (virtually) finished.  I work for a housing association in Bristol and we could never build anything like that so quickly! 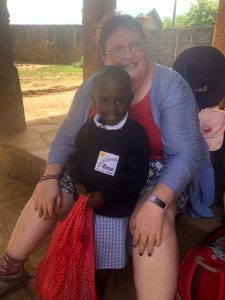 “Since returning to the UK, I keep in touch with one or two of the teachers. I know the pandemic has hit them really hard. The reality over there is that if you have no work you get no pay and, of course, there is no furlough scheme.  ETK has managed to pay the teachers and the teaching staff by raising money and has done an amazing job with food parcels.  In Kenya, they have all pulled together and the school’s efforts have been a life-saver – literally – for the local people. When I went out, I arranged for food parcels for a few new sponsors from Portishead: we were paying £10 which would feed a family for a month, beans, maize flour, oil, thenthe  pandemic hit and prices went up and it was so much more difficult.  But Educate the Kids has made a huge difference, not just to the pupils but also to the other people in the area. It’s desperately difficult for the children there because their parents are so busy fighting for survival. Despite all our grumbles in the UK, it’s impossible to imagine anything like it in this country.

“Tanya and my friend and I did daily updates on social media when we were there. I did vlogs and posted them on Facebook.  A lot of friends have children at school in the UK and were touched by the stories and a few people said, ‘I’m going to sponsor a child, or do a one-off donation.’ We got about 10 new sponsors from that trip. When you see kids with shoes that are falling apart, or they have cut the back out because they because their feet are growing, you want to try to help.  I hope that if you are reading this for the first time and have never heard of Educate the Kids then it inspires you as it inspired me.  As I said before, these Kenyan children filled my life up with love again and if they can do that for me then what can they do for you – and, more importantly, what can you do for them?