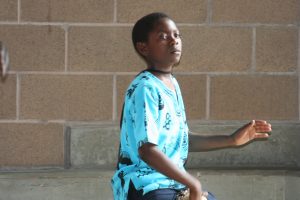 Kombe started school at Jolauabi when he was 4 years old with his brother Randu and his sister Sada (pictured above) I remember visiting their home, their father was working away from the home at this time in order to find a means to feed his family. The area that the two boys slept in had half a roof collapsed in on it, but they were still very proud to show me around their house and share whatever they had with me. Kombe along with his siblings came on the very first UK tour in 2006, he and his brother were referred to as Tom and Jerry because they were the ones that you really had to keep an eye on, and were always getting into mischief! Sada, who was one of our favourites on the 2006 & 2007 tour was a beautiful shy girl…until she performed when she would amaze everyone who saw her, It was a really low point when Sada past away, we all still miss her, life is hard in Kenya! Kombe has matured into a fine young man and it was evident from the start of the rehearsal for the 2015 tour what an asset he would be in the instructing of the other children. On arriving in the UK this proved to be the case, Kombe was able to draw on his past experiences to help when the choirs visited schools etc, as he knew exactly what to expect (having visited many of the schools as a child). He was also able to revisit many families that he had developed good relationships with. On this tour Kombe showed a real flair for leadership with the children and expressed his ambition to become a teacher…the wheels were put in motion. To late to get into the very competitive teacher training college this year, but it was decided that with sponsorship help from Heather and Alex Munro, that Kombe would start his training off at Jolauabi School, and progress from there.

it is a joy to see the growth in this young man and we wish him all the best in his new exciting future.