make a donation
A year’s school, uniform and food – for the cost of Netflix
10 Sep 19

At the time of writing, the temperature in Mesa, Arizona, where Dean and Catherine Leonard live was c. 45C.  That’s a lot hotter than the weather in the town they used to live in - Tong, near Bradford in the north of England.  Dean and Cathryn had wanted to move to the US or Canada...

At the time of writing, the temperature in Mesa, Arizona, where Dean and Catherine Leonard live was c. 45C.  That’s a lot hotter than the weather in the town they used to live in – Tong, near Bradford in the north of England.  Dean and Cathryn had wanted to move to the US or Canada and when they got the opportunity about ten years ago they seized it with both hands and are now very happily established here (although they do miss their family and also Leeds United, their local soccer team in England!).

A few years ago, as Dean described it to me, “we felt we were blessed to have the opportunity to come and settle in the States so we were thinking about doing something more and had enquired about a working holiday/humanitarian-type thing, although perhaps without any clear idea of what we wanted.

“Then, we saw a post on Facebook that a friend from the UK had placed about a charity called Educate the Kids. He was asking for donations to help rebuild a house that had been badly damaged in a storm in Kenya.  He also told us that no-one at the charity takes a cent for their work: every dollar, every cent, goes to help the children.  That was unusual in our experience and made us interested to find out more.

“Back in England, I had trained as a carpenter/joiner and then retrained as a building surveyor, so I knew I had the skills they were seeking. I got in touch with my friend and said, ‘how can I help?’ and he replied, ‘just send some money please.” So we did.

“I then said to him, ‘supposing we go over and actually build a house?’ and he said, “do you want to?” We did, but first we carried on raising money for the charity and then another couple joined us and we all went to Kenya.  We used the local quarry in the village and a team of young men and women from the village to help with the labouring. We were there for about two and a half weeks and we managed to build a house from scratch in that time. 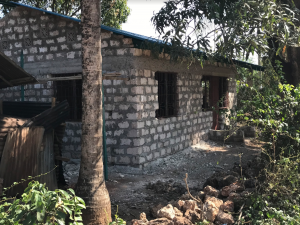 “That was in 2016 and that trip really piqued our interest in the charity.  On that first visit, Catherine went with the women and girls to the school and helped out there. They also went to the nearby village and handed round food parcels.  We got really into it and decided to sponsor a couple of kids while we were there. One was living at the orphanage and the other was a young girl from the village – she had previously been sponsored but had lost her sponsorship.  We went to her house and saw the appalling conditions they live in.  Many houses have only two rooms and there can be six or seven people living in a little shack.  The walls are made from dirt and branches, there’s a tin roof and dirt floor with only one filthy mattress for the entire family to sleep on. There are no cooking facilities as we’d understand them and, of course, no electricity, no toilet and no mains water.  Women have to walk four miles to a well in the village – there and back every day. 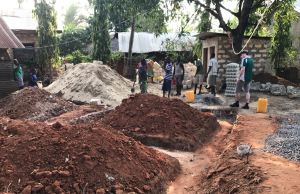 “The experience changed our lives for the good. We realized that they have found the secret to life, in that whatever their circumstances are they find a way to be happy. It is amazing that although they are in abstract poverty, they always have a smile on their faces. It made me realize that everything we have in life is temporary and could be taken away at any moment – our house our jobs our home and our health. I think many of us would struggle if these things happened to us, but these lovely people have discovered joy no matter what. 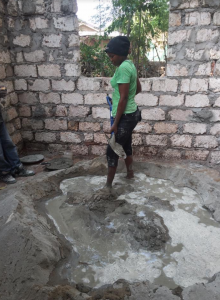 “We would love to get more American friends involved.  When we get the chance, we explain the plight of these children, the conditions they live under and how education helps brings them out of poverty. In particular, we tell them how inexpensive it is to help someone.  For example, when we were helping build the house, we got close to a number of the younger people who were labouring with us and one young man really stood out. He was so articulate and intelligent and when we asked his ambition, he told us, ‘I want to be a journalist, but I can’t afford to go to university or college.’ Catherine and I decided to support him through university.  To cut a long story short, we’ve helped him for three years and he’s now qualified and got a placement with a company. I know that Educate the Kids is currently in the process of setting up a bursary fund that will support other students go to college and university. This is a great idea as it makes it easy for people/companies to donate and won’t be restricted only to people like us who have met or been introduced to someone in Kenya. 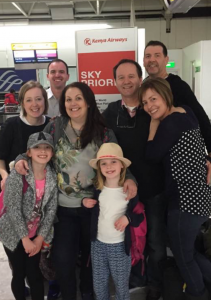 “Of course, university and college fees are expensive, but if you want just to sponsor a child through school it costs about as much as a Netflix subscription. That gets the child their education, uniform and food.  For many, the meals they get at school are the only food they get all day. It’s such a little but it makes such a difference. We’ve spent a while telling our story to people in the US, both on Facebook and face to face and explaining how blessed and rich we are in this country and we’re pleased to say a few have got involved, but we’d love to see more help this amazing charity. Would you really miss the cost of a Netflix subscription or a couple of coffees a month from Starbucks?  That’s all it costs, but the difference it makes is almost unquantifiable.”