make a donation
Americans can be very generous. Tell them about Educate the Kids
11 Jun 19

Educate the Kids has a small number of supporters in the US (we’d like more though, so please do tell everyone you know if you are on that side of the pond!).  Karen Betten (pictured above with Maureen and one of the children in Kenya), who lives in Utah, knows Yvonne and Maureen (the founder of the charity) personally, having met them over 26 years ago while serving as a missionary in Scotland ... 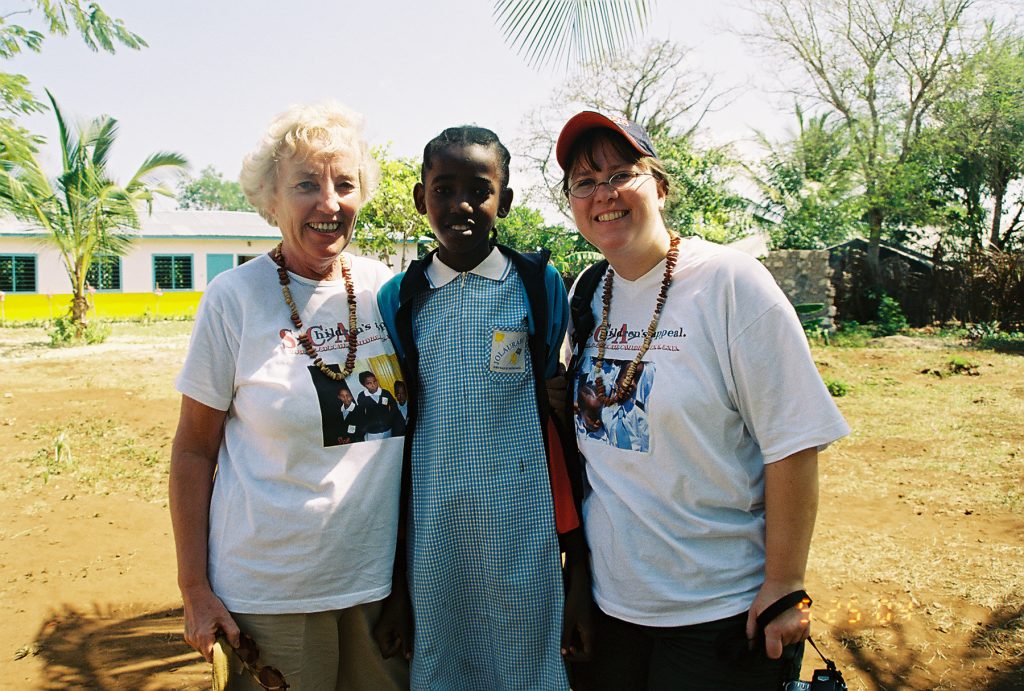 Educate the Kids has a small number of supporters in the US (we’d like more though, so please do tell everyone you know if you are on that side of the pond!).  Karen Betten (pictured above with Maureen and one of the children in Kenya), who lives in Utah, knows Yvonne and Maureen (the founder of the charity) personally, having met them over 26 years ago while serving as a missionary in Scotland for The Church of Jesus Christ of Latter-Day Saints.

“After returning home to the States, I kept in touch in Maureen and Yvonne. While attending university, I happened to mention to Maureen that I was taking a course on building websites and she asked if I’d build one for the charity.  I agreed, however, at that time, the charity was known as “The Samson Chivatsi African Children’s Appeal”, or “SCA Children’s Appeal” for short, both of which were much too long for a website name. Maureen and I talked it over for a few days, and we chose “EducateTheKids.com” as the website URL as it is much short and clearly states what the charity’s primary purpose is. I built a very simple website and then updated it with announcements, newsletters, pictures, and whatever other information I could get. I managed the website for a few years until someone else took over the content management, and now I just provide the web hosting site, give email support, and sponsor a few students.

“Things sort-of developed from there.  Maureen and Yvonne kept saying to me, ‘Come to Kenya,’ and in 2004 I did.  It was a life changing experience. The things you see there are, well, they grab your heart. The most amazing thing is how the people behave in the midst of poverty that most Americans could barely comprehend. They are the happiest people you’ll ever meet.  Culturally it’s amazing.  You can go to other places that are as poor, but they don’t have the same light in their eyes.  I’ve never been able to put my finger on why they are so happy. They will share anything with you. It’s different from anywhere I’ve ever been.

“And of course, they desperately want an education. These little tiny kids who really understand how important education is will walk for miles to go to school and are desperate to learn.

“We brought the kids over to the USA in 2008 as a follow-on to the UK Choir tour. I arranged quite a lot of that tour and it was an amazing experience. People who saw them sing or who hosted them still talk about the choir members: they ask about how they are, want to know if they are coming back, wonder what the kids they know are up to these days. A great part of their visit was just seeing how people were so willing to jump in and help with hosting, transporting, and feeding the choir. Also, some amazing opportunities for the choir just came out of nowhere by random connections or by someone seeing the choir perform and then offering to connect us with someone else.  Through this kind of opportunities, the kids got to have a special workshop with a member of the Tabernacle Choir at Temple Square, and they got to be guest performers at Peter Brienholt’s concert held at large outdoor amphitheatre where they sang and danced in front of thousands of people.

“However, when it came to donations to the choir and the orphanage they were raising funds to build for, their time in the US wasn’t as successful as we’d hoped. Americans are used to giving charitable donations (and receiving tax credits as a result), but at the end of the day it’s an individual choice. That said, there is no doubt Americans can be very generous.  I just wish more of them knew about Educate the Kids.

“At that time in 2008, the US was in the biggest economic recession since the depression in the 1920’s, but in spite of that, I think a large part of the problem is that there is a huge mistrust in how much money is actually going to a charity.  People have also read about scandals with charities and that puts them off. I want people to know that every single cent donated goes to the kids, there is no administrative overhead covered by donations, it ALL goes to benefit the kids in Kenya.

Something else worth noting is that while many of the charity’s supporters come from different religions, in Kenya, what religion a child is has no bearing at our school. No one in the schools even thinks about whether the children are Muslim or Christian or something else, and the kids don’t care either. The culture at the school is very non-prejudiced and it’s common for a Muslim and a Christian student to be best friends; I think it’s one of the many reasons why the Educate the Kids’ school is so successful.

“When I am speaking to my friends, or to anyone I meet, about Educate the Kids, I always stress the fact that this is a charity you genuinely can trust: they really do spend all the money they receive on these unbelievable children. Having been to the school in Kenya a couple of times, and having been involved with one of the choir tours, I also love to share those experiences and explain just why these kids tug at my heart, every day of my life.  I’d love it if my fellow countrymen and women would get involved and give a little of their time and means too.