We’ve interviewed a wide range of supporters of Educate the Kids in the last year.  Without exception, every single one has paid tribute to the lady who, more than anyone, has been the originator and driving force behind this singular charity.  Consequently, when her daughter said, “why don’t you interview mum?” it seemed such an obvious thing to do that I wondered why we hadn’t thought of it before.

We’ve interviewed a wide range of supporters of Educate the Kids in the last year.  Without exception, every single one has paid tribute to the lady who, more than anyone, has been the originator and driving force behind this singular charity.  Consequently, when her daughter said, “why don’t you interview mum?” it seemed such an obvious thing to do that I wondered why we hadn’t thought of it before.  So, for those of you who are new to Educate the Kids, those of you who are seasoned supporters – and, especially, those of you who are on this website for the first time and wondering what it’s all about, this is Maureen’s story. 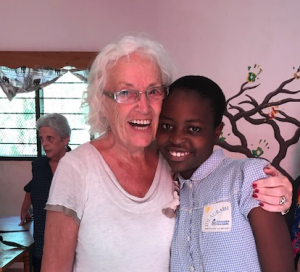 “Some 21 years ago, I don’t know how many people will remember this, but we used to have what was called teletext on the TV – a form of text news, information and advertising – and one of the more popular advertising pages was for holidays.

“On that particular day, we had the teletext holiday page on the screen when up popped an offer for a trip to Kenya.  I remember it was only about £220 and, as my husband’s birthday was coming up, I went and booked it, without being aware of all the things you needed for a trip to Kenya, such as innoculations!

“Anyway, we got there and on the first night in the hotel there was a fire. We woke up and although there was smoke, there was no danger and when we were milling about some ladies from further along the corridor invited us to their room.  There, they explained that they were going to a school the next day, taking pens to give to the children. I accompanied them and was amazed at what I saw: in particular, how keen the children were to learn and how happy they were to be in school. People who go to Kenya today are shocked at the poverty they find, but two decades ago it was, and I know it may be hard to believe, even worse.

“Now at that time, I used to sponsor through some of the big aid charities, but to be honest I was not totally comfortable with how they used the money and especially how much of it went on admin and salaries.  I asked the head teacher if there was a child I could sponsor and I was appalled at the long list of kids he showed me who were needing support.  We choose a wee boy from the list, called Samson, and that, I suppose, was where it all began.”

“Apart from the fact that there were so many children needing sponsors, the main thing that went through my mind was ‘how can those children live in such a state when it takes so little money to change their lives?’

“Given the success we currently enjoy at Educate the Kids, it may surprise some people to know that we nearly didn’t get the charity up and running.  I remember that in the early days, when we approached people, including some friends, they really did not want to know.  That upset me, but looking back I think it was naivety on my part. Setting up a charity is not easy, but I was determined to do something to help those kids I’d seen living in such poverty in Africa and I knew that education was key to turning their lives around.

“I won’t pretend it was easy back then.  We simply had to plough through, but, little by little, people came on board.  You have to remember that 21 years ago everything was done my snail-mail: we’d get cheques in the post and send a thank-you letter back but our funds gradually began to build up and we were able to start the work we wanted to do.

“The school is built on the site of an old bar/bordello.  At that time, it was surrounded by mud huts and lying empty, so we leased it and converted it into a school.  Sadly, there is a lot of corruption in Kenya, and because we really didn’t know a lot about education back in those days it was difficult to make sense of the local “rules” and kick-backs that were expected.  People were surprised when we didn’t want to play by those rules, but that only made us more determined.” (to be continued).