make a donation
Bars of chocolate and magazines were my thing. So a few pounds a month was nothing..
08 Jun 21
share this article

Claire Haigh was born in South Shields but raised in West Yorkshire.  As she says, she’s a Bradford lass; now retired, but an enthusiastic, committed and long-term supporter of Educate the Kids.  She got to know about the charity via her local church… 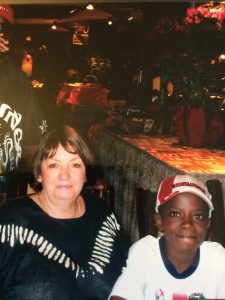 “Someone I knew from the church went out to Kenya, not to go to the Educate the Kids’ school but just for a holiday.  However, they did pay a visit to the school and decided, there and then, to support a child.  When they came back to the UK my mum and I met them and they told us how excited they were by their experience in Africa and, ‘it’s only £6 a month to support a child at Jolourabi School.’

“I was working at the Department of Work and Pensions, in the JobCentre, at that time and I just thought, £6 is less than I spend on magazines and chocolate every month!  I got in touch with Yvonne, who as you may know is one of the key organisers of Educate the Kids, and she said they were looking for people to sponsor some new children who had just started at the school. ‘Do you want a boy or a girl?’ she asked, and we said we would go for a boy because we have two grandsons so they could write to each other.  As a result, we were introduced to Stephen Ouma and I’ve sponsored him for 15 years now. 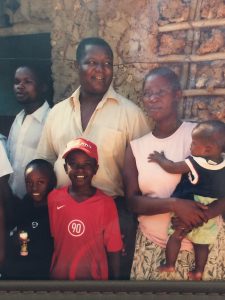 “When we began to sponsor Stephen, he had just been orphaned. He was, understandably, traumatised and as the youngest of seven children he was shipped off to a relative, his Dad’s younger brother.  Unfortunately, his family had lived in the north of Kenya and his uncle lived near Mombasa, at the other end of the country.

“I’m pleased to say that my grandsons have done just what I  hoped they would do and kept in touch with Stephen, as we all have. As Stephen was growing they were growing too so that perhaps made it easier for them to relate to each other.  I’ve been out twice and the first time we went with my son and his wife and our two grandsons.  The intention was to have a lovely two week holiday in a five-star beachfront hotel, but we actually spent every day in the school.  It was wonderful. My grandsons were nine and 11 at the time and they thought it was unbelievable.  We had taken lots of footballs and they played football all day. Even if they have no shoes they play football in Kenya. Through playing with these little Africa children every day they got to know Stephen and some of the other kids really well.

“My two visits there gave me the opportunity to meet Stephen and his uncle and get telephone numbers and addresses to keep in touch. Today, Stephen and I communicate via WhatsApp and we speak almost every week.  When he got the opportunity to go to university, I helped the family buy goats, chickens, etc. Stephen was going 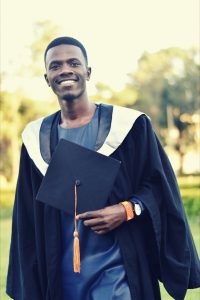 to go into marketing, but when he graduated from High School they said he’d done so well in sciences that it would be silly to waste that by going into marketing. I’ve continued to support him through his university career and I’m pleased to say that, at the age of 23 he has just graduated from university with a degree in global medicine.

“Visiting Kenya is a wonderful experience, but not everything in their garden is rosy.  In particular, there is the poverty, which is unlike anything most people in our country have ever seen.  Also, there is a lot of corruption, which I think results from the poverty.  However, as Stephen has demonstrated, education is the way out of poverty, which is why I am such a strong supporter of Educate the Kids. No-one, apart from the teachers and support staff at the school, is paid anything.  No-one who hosts the kids from the choir when they come to the UK gets any pay and no-one actually asks for money.  Every penny goes to that school and that area. You pay for sponsorship for a child (it’s now £11 a month, not the £6 a month that I originally paid all those years ago) and every so often we help by getting money for food programmes.  Obviously, over the last year with the pandemic the need for this has increased drastically.  Children without food in their bellies can’t study as well as those who are better fed.  I’ll never forget my little grandson, Brogan, who, when we were in Kenya that first time, said to me one night in the hotel. ‘At home I go to the fridge and say I’m starving, but after seeing children who are really starving I’ll never say that again….’”