Catherine Downes, lives in Ilkley in Yorkshire, England.  Although recently retired, she had spent her working life as a primary school teacher, which was how she was first introduced to Educate the Kids…

“The Singing Children of Africa (the Jolraubi School choir) came to our school.  I’d seen them give concerts before but after seeing them at our school I thought that I could perhaps have some professional input and bring my long experience as a teacher of Primary I children to help the charity.

“When I went to Kenya, I was pleasantly surprised at just how good the teaching is, given the lack of the kind of teaching technology that we regard as essential in our country.  People there say, ‘oh, we are so behind your schools,’ but I’d say that they are, at most, only about one year behind the levels we are at for the same age.  This is because, irrespective of the lack of tech, the teachers are so committed and the children are desperate to learn.

“In many ways, it took me back to my own school-days.  At Jolraubi, they get the children to talk far more than we do in the UK; the kids learn by copying and they go outside and play and learn from their surroundings.  I was amazed at their phonics and language skills. Bear in mind that they are taught in English, which is not their first language. I can’t imagine trying to teach a class of Primary I kids in England in Swahili! 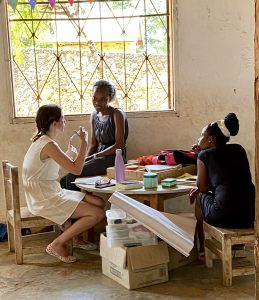 “I noticed that the teachers found it difficult to help kids who didn’t always grasp the alphabet in English the first time and I thought, ‘if only I had the laminated alphabet strips that I use at home in Yorkshire.  The second time I went over to Kenya, I spent ages laminating alphabets!  But they certainly helped the children improve their English. 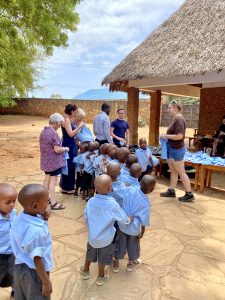 Giving out uniforms to kindergarten kids (an annual event).

“Classrooms are dark and hot and discipline is different there.  For those of my generation, it’s again more like our own school days, but nothing like UK schools are now.  Of course, for the very young ones it’s much the same, but the older children are better disciplined and there is far less wriggling around, less answering back and the children are disciplined in what we would regard as a more ‘old fashioned’ way.  Who is to say which approach is better?  The difference is that in Kenya they really want to learn and they value the opportunity they have been given.  I have noticed that when the Kenyan kids come to the UK to sing in the choir, they are amazed to hear our children complaining about school.  The look of disbelief on the Kenyan’s faces is something to behold. They are desperate to improve their lot.

“When I came back after my second visit, I did an assembly for our whole school, using my photos and comparing our classrooms with the Kenyan classrooms.  Our kids had met their kids when the choir was here, so they had seen them clean, smart and shining, but they didn’t really understand the differences between the two schools until we showed them the poverty there.  Our younger children were asking questions like, ‘do they have taps?’ ‘do they have crisps?’ ‘do they have salt and pepper?’ – while the older boys and girls here were more likely to ask, ‘do they have PlayStations?’ ‘do they have Call of Duty?!’

“I think that what I liked best about the school was the relationship between the teachers and the pupils.   Even though 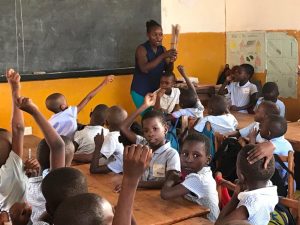 they are disciplinarians (at least in our, western, way of thinking), the children are desperate to do well for their teachers and vice versa.  Even out of the classroom they want to learn. A feeling of happiness is all pervasive.  My experience is that happy children will learn and I think that the atmosphere that’s created in any school is central to its success and with Jolraubi the results are excellent, reflecting well on both teachers and pupils.

“One area that they do struggle with though is special needs provision. When a child has special needs, such as autism or hearing difficulties, the teachers, led by Edward, the Head Teacher, and the charity do their best to help.  The good news is that Edwards is doing a Master’s degree in special needs education, part-time in the holidays and at weekends, in order to be able to train staff.

“Another area that is different from the UK is in their recognition of the different prospects for boys and girls.  What’s great is that there is now an entire generation who have passed through Jolraubi and gone on to university and good quality jobs and they go back to the school and tell the kids, ‘this is the difference my education has made to me.’  They speak to the village elders and reinforce the message that there is value for education for girls.  However, we realise that 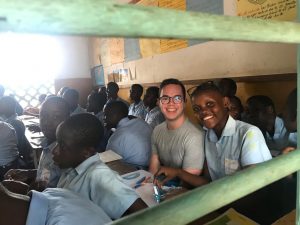 A maths lesson with the final year exam class.

you can’t tread on toes and interfere with another people’s culture, but I’m delighted to say that when you talk to the girls at the school now they say, ‘I want to be a doctor, I want to be a nurse, I want to be a lawyer.’  They look up to the west in some ways and we try and tell to them to be realistic, but give them encouragement to be the best they can be.

“Another area where I have been able to have some small input is in the Kindergarten.  The Kenyan state got them to take kids in a year early (to what we’d know of as pre-school – the year before our reception classes) but the teachers were given not training in pre-school work.  However, one of my colleagues who went to Kenya with me last time is a pre-school teacher and she gave them lots of training.  We are not coming over here and telling you how to do it; we’re just trying to help.  Having seen Educate the Kids at close quarters for several years now, I think that they do an amazing job.”