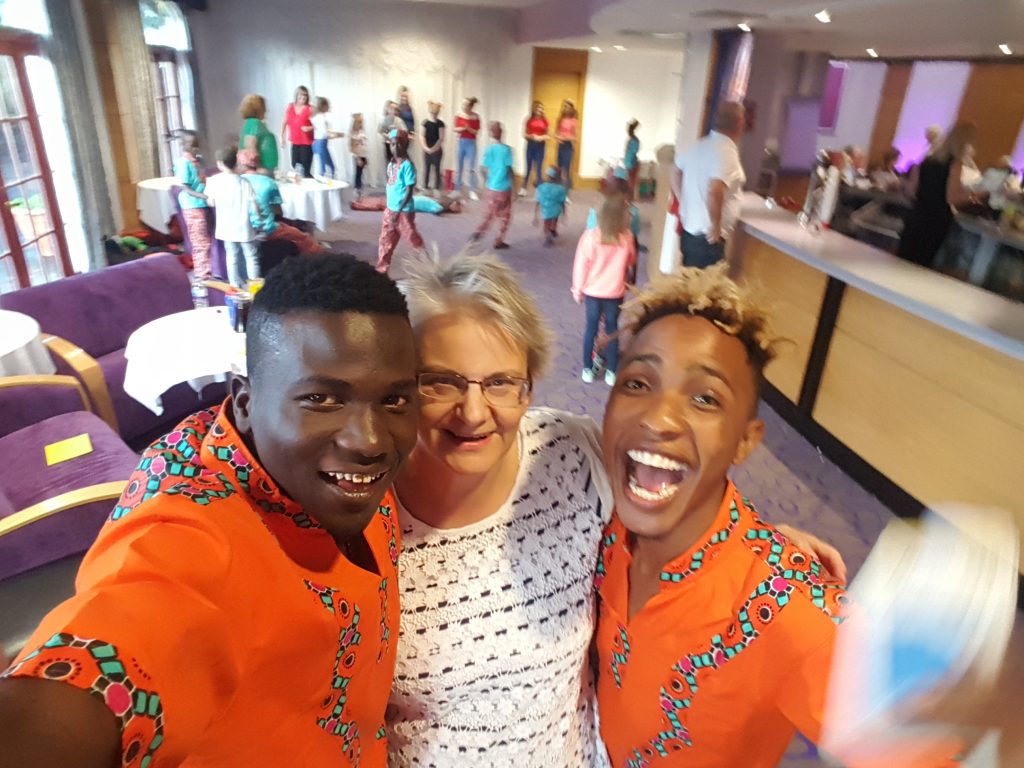 Pamela Fotheringham (seen above with Simon and Bacon) lives in Rosyth, in Fife, Scotland.  Nearly 14 years ago, she attended a presentation made my Maureen, the founder of Educate the Kids…

“I was moved by what Maureen said about the poverty in Kenya – who wouldn’t – but what really struck me was how little money she was asking for to support a child. With some charities you feel that they need the money to pay for their own costs, often including a six-figure Chief Exec’s salary, and while I understand that the big charities do have a lot of expenses, what really appealed to me about Educate the Kids was that not a penny of the money donated is used for admin, salaries or any other costs associated with running it.  Instead, it all goes to the children in Kenya, and I liked that.

“Moreover, when I found out how much it cost to support a child, my first thought was, ‘I can spend that much on rubbish in a day!’   Maureen showed me pictures of some of the kids who weren’t currently sponsored and I just thought, ‘how do you choose?’, but eventually I made my mind up. In fact, I decided to support two children, Simon and Anna, and have now sponsored them throughout their entire schooling.  I now sponsor another child, but have kept in touch with my two original Kenyan Kids. Simon, in particular, is now making a career for himself in Kenya and it’s great to see how the charity has had such a beneficial effect.

“I’ve never been to Kenya.  However, I have been very involved in the Singing Kids tours.  Along with some other great supporters of Educate the Kids – Annette, Gareth and Louise and others – we’ve co-ordinated the Dunfermline events.  Our most recent one (at the end of September 2018) was another great success.  We sold out the stalls and even had people in the balcony at the Carnegie Hall in Dunfermline and the reaction to the choir was fantastic. There were quite a few people who hadn’t been there before and they loved it.  Hopefully, they’ll decide to get involved soon.

“The reason I got involved was because Educate the Kids offered me the chance to make a difference to one person’s life.  Ultimately, it’s up to the chlld, but it gives them a chance they otherwise would not have.  It’s life enriching for both the child and the sponsor.  I genuinely feel I’ve given someone a hand-up rather than a hand-out.”