make a donation
I went to the pub and there I found the Kids!
16 Jul 20
share this article

Sandra Dalziel lives in Toryglen in the southside of Glasgow. Her journey to discover Educate the Kids was not, as she freely admits, the usual one of seeing the Singing Children perform or knowing someone else who is a supporter.  But let’s hear it in her own words…

“… I was out one Saturday – for an afternoon out in the town – and we went into a pub in Glasgow.  There was a singer with a great voice performing and we had a great time and then when I went home I decided to follow her on Facebook because she was so good.  Her name is Barbara Bryceland and a few weeks later I saw she had put up a picture on Facebook of a child she was sponsoring for some charity. I’d often thought about getting more involved in charities. I used to send away for information about a few of the big ones that you see advertising but hadn’t taken the next step because I wasn’t happy about the fact that their Chief Executives, managers and admin teams in the UK pay themselves so much money.

“Anyway, when I found out more about this charity it was different.  I got in touch with Maureen (the founder of the charity) and asked her to tell me all about what they do. She explained how the charity began and how they spend their money.  In comparison with the big charities, the money that Maureen was asking – £11 a month for a child, to educate them, to supply a uniform and shoes and get two meals a day while at School, with nothing being spent on anyone in the UK – was so little I couldn’t turn it down.  I can spend a tenner a month on magazines or rubbish like that: I do online shopping for a neighbour and she smokes and one packet of cigarettes is now about £11. If you smoke here’s a good reason to give up – donate the money to Educate the Kids instead!  You’ll feel better and healthier in body, mind and spirit! And you don’t have to sponsor a child if you feel you can’t quite afford the commitment.  The first year I paid for a bike for Mary Ann for Christmas, which I knew would be shared with her brother George to get them to school.

“You have no idea how that made me feel – I cannot explain it – like so many of Educate the Kids supporters I get pleasure knowing that they get pleasure from something as simple as a gift of a bike or even pencils or crayons.

“After meeting Maureen, I just thought, this is brilliant: it’s just what I’ve been looking for, so I said I wanted to sponsor a child and Maureen said they would send a picture of the next child that was available.  That’s how Mary-Ann came into my life. 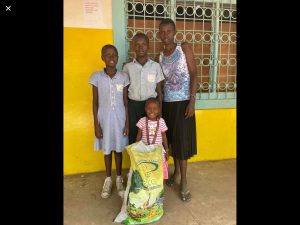 “The first year they (the Singing Choir) were over after I became involved and I met up with them.  Kombe is a great man and a great friend, not just to me but to everyone who supports the charity.  He sends me messages on Messenger about the children and I always ask, ‘how’s my wee ‘family?’ – because I have a family there now! Mary Ann has a brother, George, so I sponsored him too. Then their mother became pregnant again and wee Daisy was born about four years ago.  I have started sponsoring her as well once she started school (see photo of the family here).  However, as you may know, the school has had to close because of the coronavirus, so I’m happy to know the money is going to help feed everyone there, because they are even more desperately in need now.

“When you see the choir – hopefully, they’ll be able to come back again next year –  I tell you, you want to take them all home with you. I’ve never met kids like them. This year, although I don’t drive and have to get someone to organise my transport, I was definitely going to make a plan so I can see the choir again because George is in it, but obviously with the crisis that’s not going to happen.

“You asked what makes them different.  Well, it’s that they have nothing but they are so happy.  When they come here, it’s a culture shock – they see what for them is absolute luxury in the UK but when it’s time to leave they are happy to go back home.  It gives you a glow when you meet them.  You feel so inspired.  Their impeccable manners – how they care for each other – it’s just amazing.  They could teach a lot of us a lesson, especially our own kids here.  These kids are delighted to get their education. It really does give them a chance they wouldn’t otherwise have.”