make a donation
Music And Dance Bring Lewisham And Kenya Together As Sydenham School Hosts The Singing Children of Africa.
13 Oct 16
share this article

You would have to travel far to experience a more exuberant community event than that held recently at Sydenham School. The 350-strong audience that packed the new main hall, and which included MP for Lewisham West and Penge, Jim Dowd and Lewisham’s Mayor, Sir Steve Bullock, was treated to a spectacular and moving show featuring the 28-strong Singing Children of Africa troop made up of young Kenyans.

The group’s high energy performances raise funds for Educate The Kids, the charity that has built and maintains the schools, orphanage and other facilities that serve the children’s villages in Utange, near Mombasa. This was the latest stop in a two-month UK-wide ‘Smile’ tour but it had special significance with choirs and young musicians from both the host school and Kelvin Grove Primary School adding their enthusiasm and talent to the mix.

As well as thanking the schools and the families that hosted the Kenyan children and young people for this south-east London part of their two-month adventure , the charity’s co-founder Maureen McIntyre singled out how special it was for the Utange youngsters to have the chance to share a stage with young British musicians.

She praised the Sydenham and Kelvin Grove students and teachers : “The effort that you have put in rehearsing for our visit has really paid off and it has been wonderful seeing the two cultures coming together so effectively; practicing together today and then during this evening’s performance. It was a challenge for our children not to forget what they were meant to be doing when the Sydenham and Kelvin Grove students started to play – so astonishing was it for them to see so many instruments, let alone in the hands of people the same age as them.” 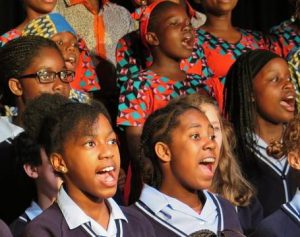 The three-hour show featured a blend of traditional Kenyan songs and dance, well-known hymns and even the reel Mairi’s Wedding performed in honour of Educate The Kids’ founders Marueeen and Ian McIntyre’s Scottish roots. For their part the Sydenham and Kelvin Grove students provided an assortment of popular favourites including The Monkeys’ ‘I’m a Believer’ and the Labi Siffre hit ‘Something Inside So Strong’. There was room too for new music with 15-year-old Nell Amos from Sydenham School singing of her own song ‘House party No 1’ for the first time publically. And in a joyous final number all 200 young singers and musicians crammed the stage for a rousing rendition of ‘Eye of the Tiger’.

In her welcome speech Sydenham Headteacher Gloria Lowe pointed out the significance of the evening for her and Kelvin Grove’s head teacher Ian Hyde: “We are both new to our schools this term and at just 20 days into the job, I can’t think of a more inspiring and warm way to mark the occasion. One of the promises I made to governors was that I wanted to open Sydenham School further to the community. The diversity and inclusivity that this event demonstrates, goes to the heart of that promise. In a world which is fractured and dark in so many places, it is wonderful to be able to shine some light and experience joy: that is the power of the music and dance!”

“It has been an amazing opportunity for us,” said Kelvin Grove Headteacher Ian Hyde. “Our school had the privilege of hosting The Singing Children of Africa on their first tour back in 2006, and it wonderful to be continuing this tradition. It gives our children a global perspective and for me personally, it is a reminder of why I teach.” For Kate Murray, mother to Sydenham student and host to 12-year-old Zulfa Hamadi: “It has been wonderful having Zulfa with us albeit for just a few days. And while much is still new to her, it was important to remember she has been in the UK for a couple of weeks – long enough for Coco-Pops to be familiar, at least!”

“It has been an excellent evening,” added MP Jim Dowd. “The performances have been astonishing. Educate the Kids is a magnificent charity representing a great cause and it is good that schools in this part of SE London have played their part in the success of this tour.”

The evening was one of significant exchange. “It is terrific for our kids to have a chance to experience at first hand African musical culture with its emphasis on drums and vocal performance,” said Sydenham’s music subject leader Alex Dottridge. “They can also pick up a lot from the Kenyan youngsters’ tight, focused and confident performances. It has been hectic pulling things together in just the short period we’ve had since the new term began. The year 7&8 choir has only been put together in the last couple of weeks and there has only been time for a few hours of rehearsal for all involved together today, but it has been an unforgettable occasion.”

“I didn’t enjoy it, I loved it,” said Kelvin Grove ten-year-old pupil Abdul Bangura from Sydenham. “It was great seeing the schools and the Kenyan children together and I loved the dancing – especially some of the solos.” For Shanay Senior (11) a member of the Sydenham School Year 7&8 choir this was the ‘biggest’ and ‘nicest’ event she has experienced. “We only started rehearsing a week or so ago and it’s been intense with several after-school meetings as well – but it has all been good and tonight’s performance has gone so well.” Kelvin Grove music teacher Felix Glenn summed up the occasion succinctly: “When people make music that’s ‘on it’, my skin tingles and I can feel the hair standing – it hasn’t gone down yet!”

As a part of her speech, Maureen McIntyre introduced 22-year-old Simon Munga – one of the small group of ‘African Legends’: veterans of previous Singing Children of Africa UK tours and on hand to be proxy big brothers and sisters to the younger children during the course of their eight weeks performing far from home. Simon received his education in the Jolaurabi school set up by Educate The Kids and he is now the music teacher there: “I have been fortunate to be a part of all the singing tours. I am now able to earn a living through my singing, so it has really changed my life. The tours give me so much confidence and courage to carry on. This year, I have been working as the group’s music teacher, and so I hope this tour will be better than ever – fingers crossed. 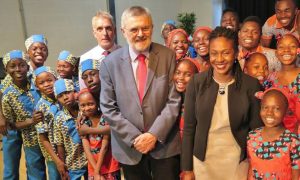 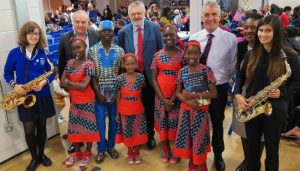 He need not have worried. The Sydenham concert was a sell out, and having been encouraged to ‘dig deep’ for the charity by Maureen McIntyre in the knowledge that the tour had just broken even half-way in and so every penny raised from this point would be going into extending the facilities at Jolaurabi, contributing to the creation of a much-needed computer suite or assembly room.

Dig deep they did: so far ticket and merchandise sales from the event are in excess of £2,500.