People come to Educate the Kids in all sorts of different ways, but Tanya Marriot has perhaps a rather more unusual story than most…

“We own two shoe shops in the Bristol area and it’s not uncommon for our customers to complain that their kids outgrow their shoes too quickly before they have had any wear out of them.  However, a number of people asked if we knew of any charities that would take these unwanted – and good condition – shoes.  I spoke to other parents about this and discovered a charity that sparked our interest, but it wasn’t a viable option. Then I had a random conversation with a mum who came into our shop.  She told me, ‘I collect uniforms for this school in Kenya…’

“This sounded more promising, so we got in touch with Educate the Kids, who came along and collected a load of old shoes from us … and it just sort-of took off from there! 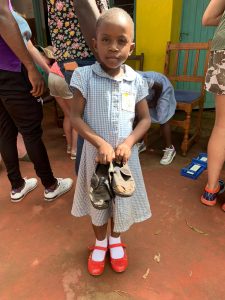 “After the first batch of shoes went out to Kenya, I said to myself ‘it would be nice to see where they have gone,’ so off I went with my older child (son) for what was supposed to be a ‘one-off, trip of a lifetime.’ That was in 2017 – and we’ve now completed our fourth trip.

“When people think of Kenya they think of a hot country, and of course it is, so they think the likelihood is that the people there would want sandals.  And they do, but when we thought about the suitability of UK shoes for Kenya there were a couple of other issues that we needed to resolve: it wasn’t just as simple as piling lots of footwear into the cargo-hold of a plane. For a start, I’m a member of the Society of Shoefitters, who train shoe shop owners and staff to make sure they are fitting shoes correctly, so I’m well aware of the problem children can have with ill-fitting shoes.

“That first year, we sent every shoe we had out to Kenya, but now we’re more choosy. Having been out in Kenya in various different seasons, I see how the kids’ needs change depending on the weather. When I was there last May, in the rainy season, it was (obviously!) wet and it became apparent to me that sandals are not practical in those conditions.  Instead, we asked for trainers, or any form of shoe that’s closed in, but not boots as they are too heavy to transport. After several years’ experience, we have a good idea of the sizes we need and we have two big ‘sorting days’ when we check out all the shoes that people have donated and are piled up in my garage! 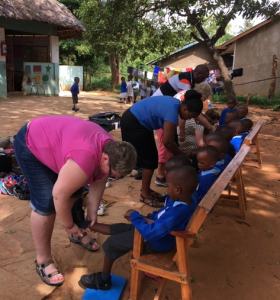 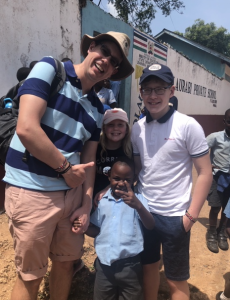 “Last year (2019), we fitted all bar 15 of the children in the school: there are always a few that prove impossible to find shoes for, despite the fact we get so many donated. All these shoes come from our own customers or people who have heard about what we do.  Then I put a post on Facebook in July/August last year to get the word out, with a ‘before and after’ pictures of one of the kids with their previous shoes and with their ‘new’ shoes.  Normally, I’m lucky if I get about 200 views of any post for our shop, but this time we ended up with 63,500!  People volunteered to have collections for shoes and other shoe shops started collecting on our behalf – it was crazy but brilliant!

“Both my kids have been there.  My daughter loves it but is still too young to understand (she’s just turned 8) whereas my son is 13 now and it’s had a massive effect on him. When he was in Kenya, he did things he’d never do here – getting involved in teaching, cutting down sugar cane and making friends with African children. Now he’s home, he still communicates with his Kenyan friends via social media. The two cultures are so diverse but they all understand social media!  He really wants to go out and help more and when we hosted the choir last year he asked to do a speech.  He did this using his own words and we were so proud and impressed.  He understands that you can be happy without having all the stuff that we in the west take for granted.  Over dinner recently, he said ‘can I go there and teach?’ We’ll see where that takes him, but his enthusiam is infectious.

“When you are out there, you can see that the impact of Educate the Kids.  Each year you go out, you see how things are improving – especially with all the new building work at the school.  You can see they (the charity) are planning for the future.  The Kenyan kids’ thirst for education is phenomenal, matched only by their gratitude for what they get.  If you haven’t got something you really appreciate it when you get it and you can see this every day in their faces.  You can also see that everything this charity raises goes to the people it’s meant to – the kids. That for me was the one big buy-in. Or should that be a shoe-in?”