If you were with me last time (and if not, here’s the link), you’ll recall that Maureen McIntyre, the founder of Educate the Kids, is telling us about how she visited Kenya, almost by chance, some 21 years ago and how that trip led her to set up this wonderful charity…. 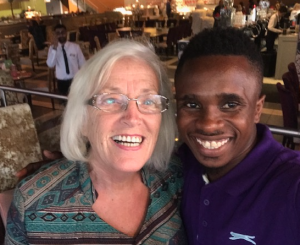 “We were leasing an old bar which we’d converted to a school, but once we got to about 200 pupils we needed to expand.  It was time to build our own school but we needed £22,000 to do so. However, we raised it and since then we’ve built four more blocks, plus an orphanage, and we’re negotiating other land to build further. We also have a kindergarten, about a mile and a half from the school.  We lease this, but we own the Primary School and the Orphanage.

Many people probably don’t know that the charity could have died if we had not had the idea for the Singing Kids.  We decided to bring them to the UK (and the USA initially) back in 2004 (CHECK). The kids love to sing and dance, so we thought this is a great way to get the message across. We did it for three years, then the corruption involved in organising it became too much and we stopped. At that point we were struggling, but when we brought the Singing Kids back to the UK again that turned us right round.  They are the best possible advert for our work and they really raise awareness of what we’re about. The crowds who want to see them are growing every year and it never ceases to amaze me how kind people are and how they welcome these little African children into their homes and their hearts.

“For me, success is about each individual child. Changing one life is where it starts.  When we began, we had an issue with mothers who, because they weren’t educated themselves, didn’t see why they should want their child to go to school. Now though, mothers know want their kids to go to school and they see the hope it offers.  You have to remember that some of these people wake up every morning with no hope of a job, of food, of anything. Unless you have seen it with your own eyes, it’s really hard to conceive of the poverty they live in. I was brought up in the Gorbals, one of the poorest parts of Glasgow, but my Mum would always have something for us to eat and we had beds to sleep in.  But in Kenya, often there is not even a mattress on the dirt floor and sometimes there is nothing to eat and they go hungry for two or more days.

“Charity, for me, is about love, not about money.  I was fortunate in that I was in the right place at the right time. Educate the Kids has been a joint effort from the very beginning. We’ve worked together, in Africa and the UK, and we have fantastic people who want to get involved and give of their time freely.  They tell me that the fact that every single penny goes straight to the children is important to them and that they know our work is changing lives Believe you me, it’s the love these people have for the kids that makes the difference – and it’s reciprocated in spades by these amazing, happy Kenyan boys and girls.

“You asked me ‘how do I see the future?’ and I have to say that after sponsoring that first wee boy I would never have thought we’d now have kids graduating from university. We’ve got two more qualifying this year and we’ve got more coming through, securing the future for the village because they bring their skills back. Narshion was our first.  He’s now a successful man with a family and an inspiration to all the children at the school.

“We can see his success mirrored in the improvement to conditions in the village.  If anyone visits today for the first time, they go ‘oh…its dreadful’ but the reality is that the village has developed and the poverty, while still off the scale in UK terms, is not as bad as it was.

We know that sponsors come and go – their lives change and they have to stop giving – and it’s a continual battle to keep the sponsorship going, but we’re doing well just now and bucking the trend for charities in general. I’m sorry to see that charities in general are getting hammered for some terrible things done by a few people in some of the bigger charities, but I’m not naïve enough to realise that without these big charities the world would be a poorer place.

“Finally, I’d like to stress that Educate the Kids is not about religion, it never has been and never will be. We never ask a child or a teacher what religion they are.  There are schools and churches who try to convert, but although I and my family are committed Christians we’re a non-denominational charity and will remain one. I love what we do, I love my faith and the fact I have it – and that drives me on. I love that we have Muslim, Hindu and Christian supporters and many who have no faith, but from day one this charity has been about a child needing education and that’s what it will always be.”