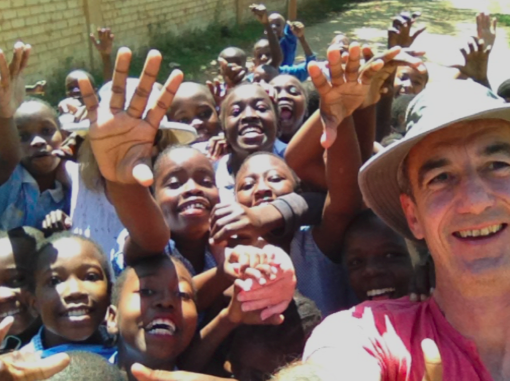 Dean Seddon-Kaye (pictured here in Kenya) has been a supporter of Educate the Kids for a long time.  A genial Welshman, he lives in Somerset and works in Devon but some 11 years ago he had a chance to go to Kenya with his wife, who was already sponsoring a child there. Since then, he has been “about 22-24 times  – we save up our holidays from work and spend our time in Africa,” and been one of our most committed supporters.

However, despite his many trips to Kenya, he has seldom ventured north of the border to Scotland. In fact, to the best of his recollection, he has only been twice: once for work and once with one of the Singing Kids of Africa trips.   Now though, he’s preparing for a new trip, to take part in September’s Kiltwalk.

As Dean admits, as a Welshman living in England “I have not a clue about tartan and kilts and I don’t even know how far I’m going to be walking, but I’ve registered on the site with the Educate the Kids and I’m really looking forward to giving it my best shot.

“As you can imagine, I’ve been getting quite a ribbing about what I’m going to be wearing under the kilt, but I know Scotland’s colder than England so I’m pretty sure that I will have some sort of garment under there! More importantly, I’ve already got over £400 in sponsorship and I’m also going to be doing an auction for the charity to raise more money. Devon Cliffs Holiday Park have generously donated a three night holiday and lots of suppliers have provided other prizes, so watch out for more news about this.”

Previously, Dean and his wife have climbed Snowdon for the charity, so we’re sure a leisurely stroll around the environs of Edinburgh will be a piece of cake.  But if you’d like to sponsor him (or any of our other Kiltwalking team) further, there is plenty of time, so go to this link and pledge some money please!

Finally, I asked Dean what he would say to persuade someone to support Educate the Kids.  His reply was one word – “Hope.” Asked to explain in more detail he said:

“Educate the Kids picks the poorest children, the ones with no hope.  I’ve seen us take only one child out of a family of nine, and while you might think the rest would be jealous, in fact everyone in the family is so pleased that at least one of them is going to get an education and have a chance. They look after each other, not just within their families but within their communities. It’s a poor country and if a mother dies someone else takes her kids and brings them up. These kids have nothing, literally. Despite that, even if they have nothing they’re still prepared to share half of it with you.

“When you see the children’s faces light up at the prospect of going to school it’s so humbling. Here, we think of school as a chore: in Kenya, it’s a privilege. It brings hope – the hope of a long-term education and a job, but they never forget their responsibilities to their families.  They are the most lovely people imaginable and it’s a joy to be able to help them. I hope that if you read this and feel inspired to take part in the Kiltwalk, or help in some other way, then you’ll do so.”