In all the conversations I have with the brilliant people who support Educate the Kids, it never ceases to amaze me how they each bring slightly different insights and thus help to expand our knowledge about this most remarkable charity.  Liz Grant has perhaps more insights than most, as she has been involved from the very start (or last century as she puts it!). 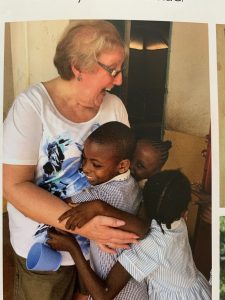 In all the conversations I have with the brilliant people who support Educate the Kids, it never ceases to amaze me how they each bring slightly different insights and thus help to expand our knowledge about this most remarkable charity.  Liz Grant has perhaps more insights than most, as she has been involved from the very start (or last century as she puts it!).

“I live about three streets from Maureen (the founder of the charity), in the same area of Livingston in Scotland.  I knew her from way back and

I was actually a director of the charity at the start, helping her get things established. I was pretty sure it would be successful from the word go. That said, I never imagined it would become as big as it is today.

“Educate the Kids has grown because the volunteers come to Kenya and get involved. Volunteers use donations they have raised to buy building materials, furniture and specific equipment.  Others bring uniforms, shoes and gifts.  They help with building, paint games (hopscotch, etc.) to play in the grounds and share ideas to stimulate and provide variety.  Once approved, many of these ideas are quickly put into action, to the benefit of both teachers and pupils.  All their time is given freely; no-one is paid any money and all funds go straight to the charity itself.

I also think that it helps that you can support Educate the Kids and have a holiday at the same time, which is not something many other charities can boast.  You can go to Kenya and work at the school in the morning and then in the afternoon you can go to the beach and have a ‘normal’ holiday.  There is nothing to be ashamed about in the latter, and everything to be proud of in the former!

“Not only that, but you get to meet such a range of nice people amongst all the volunteers who go out there.  I’ve made good friends from Somerset and Yorkshire whom I would not have got to know otherwise.

“I sponsor a little family. A little girl ‘found me’ when I was out there.  I was in a clearing near the school and this wee girl came up to me and touched me.  The school Headmaster told me, ‘I think you’re the first white woman Lucy’s seen close up.’ We went to her home.  I say ‘home’ but it was actually a mud hut. I met her mum, who had several children: Lucy, who was then about five, Fatuma who was two and Salim, a baby. I was so moved by their situation I made up my mind there and then that I’d sponsor them all. 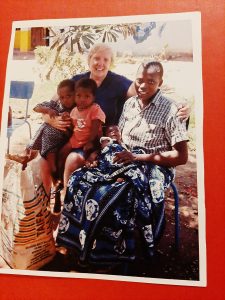 “Things have moved on since then.  Lucy is now much older and has moved ‘up country’ away from the village, but my son now sponsors Mariam, another younger sister. My grand-daughter (aged 6) was thrilled and actually thought she would be coming to stay with them the next day! She is sending clothes and letters to get to know her better.

“The Singing Kids tour is the best advert for the charity. If you haven’t seen the kids singing and dancing then do make the effort and you will thoroughly enjoy it. Look out for news on the website about the tour this autumn and get along to one of their shows: I promise you won’t regret it!

“I think we can learn from them that we should enjoy the simple things in life. We have material things that often we don’t need, whereas they have virtually nothing but are far happier than we seem to be in our rich country. Sitting together, sharing and singing brings them together and gives them happiness.

“I also think that the lack of material things makes them far more imaginative.    On one of the Singing Kids tours, we had time to kill before going to the theatre and had about 26 kids and five adults to entertain.  We needn’t have worried. They got out of the bus but all we had was a football. Needless to say, the men and the boys took that, so the girls rolled up a couple of socks and played dodgeball. I can’t see that happening with kids in this country!

“I also think it’s vital that we remember why the charity is called EDUCATE the Kids.  They are so keen to learn and many walk miles, literally, to school. They seem to absorb knowledge and are always asking questions.  They know that education gives them a chance in life and that the school motto is ‘A hand up not a hand out.’

“I believe a grande coffee in Starbucks currently costs £2.95.  For  £11 a month – the price of fewer than four of these a month – you can feed, educate and clothe a child. And remember, not one penny goes on staff or admin costs: every person who works for Educate the Kids is a volunteer. Why don’t you become involved? It really is a remarkably different charity!”