make a donation
We blagged 300 teddy bears through customs in Kenya!
28 Nov 19
share this article 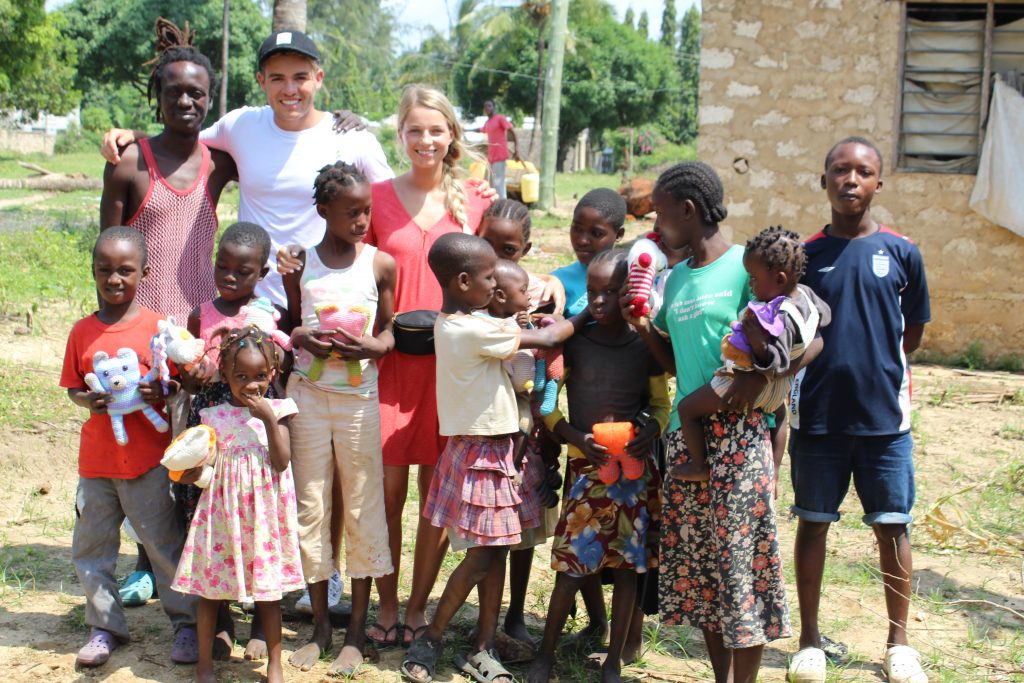 Charlotte and Cameron Wilkey live in Leeds, where they have their own freight forwarding business. They got to know Educate the Kids through a family friend, who introduced them to one of the directors of the charity. A trip to watch and listen to the Singing Kids of Africa strengthened their interest and then three years ago they went to Kenya on holiday. While there, they visited the school …

“Even though this trip was a holiday, we went to the school every day. We’d start early in the morning, painting, teaching and also helping to dig a trench so the toilets could flush in the Kindergarten. These are perhaps not the kind of things most people think of doing when on holiday, but in the afternoons we’d do all the normal holiday things – socialising, going to the beach, etc.

“After we’d been to the school, we decided to ask about sponsoring a child. We think the fact that we’d been there and seen how things are a first hand, plus, more importantly, we could actually see where the money goes (and that it’s not wasted), all conspired to help make up our minds to do this. The boy we sponsor was abandoned by his parents when he was two.  A woman whose son is in the Singing Kids choir took him in.  This means there are five people on a double mattress on the ground in their home.

“[Charlotte] – it makes you feel very lucky.  It is just the way it is for these kids, but it’s a completely different world to westerners like us.  We took my two younger brothers and one of them was crying; he just couldn’t believe what he was seeing. On the one hand there is this grinding poverty, on the other the people are just so happy. People say ‘oh such and such is really eye-opening, but this really is… What makes it harder in some respect is that after having been in the village you then return to your lovely four-star hotel where, sadly, many tourists are scared to leave the beach and surrounding area.  If only they made the effort!

“[Cameron] – on the last day we were there, we took some of the kids to a restaurant and most had never been to one before. One had never had chicken off the bone and was shocked that we don’t eat the bones.  Mostly, they eat maize meal.  To give you an idea of how little it costs to help, an English friend/sponsor sent me £40 to buy food and that lasted a family of five for two months! But if you don’t have any money, as many of them don’t, then it’s so hard to make ends meet and have enough to eat.

“[Charlotte] You asked how do we get people involved in the UK. We think that social media pictures make a big difference.  Today, a lot of people spend a lot of time on Facebook etc. and we have found that putting our own pictures up has provoked interest and got people to contribute. It costs so little to send a food parcel but, as Cameron said (above), it makes such a difference.

“We’d encourage everyone to come and help and be part of this. We know that people are inundated with requests for money from charities, but this one is different.

[Charlotte] – I think that many people these days see the big charities’ adverts on TV and because they know they’ve been professionally made to provoke an emotional response, quite a lot will mentally tune out.  Charity shouldn’t be a guilt trip: rather, it’s how much it changes people’s lives that matters.  If you go and see the Singing Kids for the first time (and please do), you’ll hear the songs they sing, but won’t, at that time, be aware of the poverty in which they live. It’s hard to make the connection between seeing these happy children singing and dancing in the UK and the reality of their lives back in Kenya, but believe me, I’ve seen it and it’s very real.

“If what we’ve said has piqued your interest, why not do what we did: go on holiday to Kenya – where you’ll have a great time on the beach but can also experience life for the locals and learn how you can make a difference. 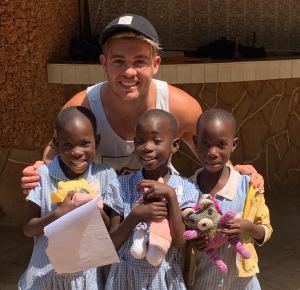 “[Charlotte] – that difference can be just something really small. For example, we took about 300 teddies which my mum had crocheted. We blagged it through the airport, telling them, ‘it’s school supplies, papers, etc.’ but when you see a child’s face light up because they have, for the first time, a toy to love like a teddy, it is so uplifting.

“[Cameron] – I feel so fortunate being born here in the UK and, although it’s a cliché, giving something back is important in life.  It is also good for you, because, so long as you’re doing it for the right reasons, you get a lot back in return, knowing the difference you are making.

“[Charlotte] – I agree.  I think it’s just a good way to make a difference in people’s lives. It’s often the small, inexpensive things, like the teddy bears, that have a big impact, especially for the younger children, and it puts into perspective how lucky we are. I’d encourage anyone and everyone to support Educate the Kids.”