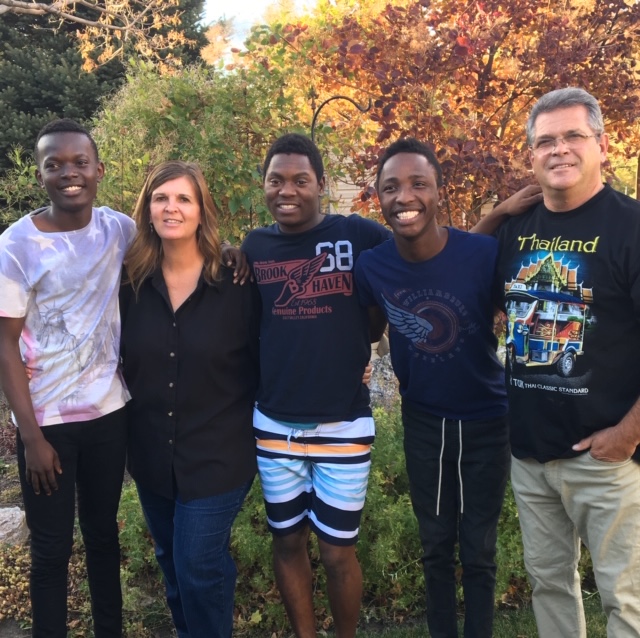 Kohnie Nielsen (pictured above) lives in Sandy, outside Salt Lake City in Utah.  About a dozen years ago, the Singing Kids of Africa visited her neighborhood…

“They were looking for sponsors and a lady I know was asking her friends if they would take these children into their houses while they were here and look after them.  The local people here don’t see this kind of thing too often but we fell in love with these kids. They are so humble, so happy, always smiling, so positive, they seem to not have a care in the world – yet when you hear their backstory you wonder how they can be as they are.

“Quite a lot of people came along, but, sadly, they didn’t all give money.  It’s a problem in the US that we can’t claim tax back on charitable giving unless the charity is registered in our country.  Educate the Kids, as you might guess if you watch this YouTube video, with its lovely Scottish accents explaining what the charity is about, started in the UK and it is, in my opinion, one of the best charities I’ve ever seen. They don’t take a single cent for administration and running the charity: the only money they spend is in Africa on the kids’ education and the teachers’ salaries.  That makes it a very special (and unusual) charity.

“I think that most people in the US know that we are rich compared to the vast majority of the people in the world.  A lot of Americans don’t leave our country as it’s so big and it’s very expensive to go abroad. For us, the idea of living in a one-room shack with filthy mattresses on the floor to sleep on is not something we can relate to. Yet these kids – many of whom live in just such circumstances – are just so amazingly happy and are prepared, even some of the young ones, to get on a plane and go to a country that is as far removed from their own experience as it’s possible to be.

“Not only that, but here in the US and in Great Britain, we all expect a free education. As a result, as we all know, our kids wake up every morning and don’t want to go to school. In contrast, these Kenyan children absolutely yearn for school. Many of them walk miles to get there and, believe it or not, they are sad when the lessons finish.

“I’d always been interested in Africa, but we have never been there and I’d never met anyone from Kenya before the Kids came here.  I sponsor three of the children just now, paying for them to have an education and get meals during the day (something they might otherwise not have) – it brings me a lot of joy.  I keep in touch with them through Facebook Messenger.

“You asked me how to get more Americans involved.  One thing that might help would be to explain to Americans how little it costs to sponsor a child.  The problem is that the Educate the Kids website uses British pounds and quite a lot of Americans don’t know who many dollars they get for a pound. The GOOD NEWS is that currently £1 is worth $1.25, so that means it only costs less than $14 a month to sponsor a child through early years school and pay for their meals and education.  Be honest, you can spend that in Starbucks in a few days, but a few hits of caffeine won’t make you feel anything like as good as supporting Educate the Kids. In our opinion, it is very important to help people in need and what better way can you do that but by giving an education to children?

“We love this charity so much. We love the kids. We turned on a video of them last night.  It always brings on my tears. These kids have nothing compared to us. We’re willing to help in any way we can and I’d love it if you take a few minutes to find out more about them and then, if you agree with me, make your own decision to support them.”