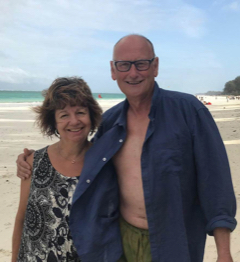 Paul Scott lives near Chelmsford in Essex. He is retired now, but 11 years ago he and his wife (pictured here) went on safari to Kenya.  They were staying in a hotel in Mombasa and Janet, his wife, got chatting to a woman who was wearing a garland and talking about a school.  This lady told Janet her name was Maureen and that she ran this educational charity for Kenyan kids, and then said to her, “why don’t you come and look at our school?”  Janet said, “that sounds interesting, yes, we will come and see it.”  And that was the start of our long-term, brilliant relationship with Educate the Kids.

We went to the school, were stunned by what we found, fell for these lovely Kenyan children immediately, ended up sponsoring two of them and have since been back to Kenya about five times.  We’ve watched “our” kids grow up and prosper, buoyed by the education the charity has provided.  Crucially for us, it’s not particularly expensive: a pound goes far further over there than it would here for charitable purposes.

It’s quite humbling to see how little the poor in Kenya actually have – and then to see how proud they are of what they do have. I remember we were staying in a hotel near the beach, not too far from the school, and we thought we’d take a roll from breakfast and feed the fish in the sea as we’d seen others do.  We met this little beach boy: he told us he hadn’t eaten for days and asked if he could have the roll.  We gave it to him and he asked us to come to his house.  It was a shack, yet he was so proud of it.  He was part of a large family, but many of them had died. Bereavement on a massive scale is very common there: you’ll talk to a child and they’ll tell you they had six brothers but four have died, and so has their mum (and sometimes their dad too).

On the other side of the coin, there are people in Kenya with lots of money, yet these children struggle to survive.  Some would say their condition is one of degradation and it’s hard to imagine any human being not being moved by their plight.

Paul told me that one of the reasons he and his wife have remained supporters of Educate the Kids is because of the people who run it. “Maureen is a powerhouse,” he said, “and she and Yvvone have the ability to connect with people and get a reaction. Yet they don’t let their hearts rule their heads when they are dealing with the children – they have a pragmatic vision of what they want and how to do it. They have learned through the hard experience they have had, especially the corruption that, sadly, is all too prevalent in some places in Kenya.

“Maureen has the will and determination to make and use her contacts to benefit the charity; she has also learned how to maintain control over the school’s finances to avoid the problems of corruption, so we know that the money we give is going to the people who need it.  With 700 kids in the school and all the associated admin that involves, Maureen and Yvvone’s energy and their ability to draw people in is staggering.

“Part of the appeal is that Educate the Kids is not a huge charity. It’s about the school, and that is it. Another part of the appeal is the fact that they are responsive: if we have a query or want to know something then we call or email and they always respond, and quickly.  It’s run, by volunteers, no-one is paid salaries and it just seems so right – what a charity should be.”

I then asked Paul, “why become involved?”  `His view is that the main reason for involvement in Educate the Kids is the personal direction and leadership from the top of the charity. As he puts it, “they run a tight ship and don’t waste money.”  In addition, Paul and Janet have seen the progress of “their lad.”  Paul told me, “it’s a joy to be involved; we have gone out to Kenya a number of times and watched him growing up. I love Kenya and the people there. Even though many have nothing they are so welcoming. There is a genuineness about those involved in the charity and the school and if you haven’t got involved I’d encourage you to do so.  We did, and we’ve never regretted it.”