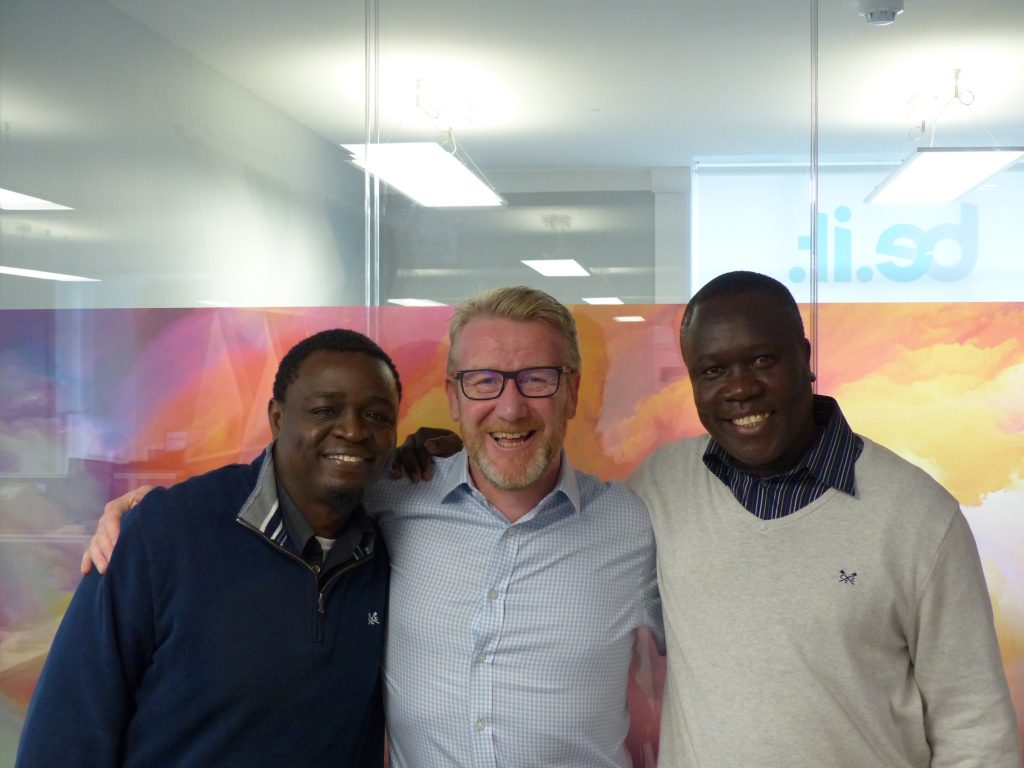 Gareth Biggerstaff is the Chief Executive of Be-IT, Scotland’s largest independent recruitment company for IT professionals.   Pictured here with Chris (Deputy Head of the School, left) and Edward (Head Teacher, right), he has been a supporter of Educate the Kids for several years and as well as his hands-on involvement with the Singing Kids tours he also has some interesting ideas about how businesses in general can help the charity.  However, before we get to that, I began by asking how he got involved in the first place…?

“It started on the back of tour about five years ago. I’d never heard of the charity before and it really all came about by chance – literally a friend of a friend put something on Facebook to say that a one of the host families had dropped out and couldn’t take the kids in so they were looking for someone else to step into the breach.  My wife responded and the first I knew of it was when I came home from work one night and found three Kenyan children sitting at the kitchen table!  That was my introduction to Educate the Kids.  It was a good one because we had to take them to the shows and ended up watching them dancing, meeting more of the children and the adults who organise everything and, well, I just became absorbed into it.  Before we knew it, they were coming back again. On that first occasion, they stayed for a few days but we built a bond which continues to this day.

“Amongst the adult organisers at the concerts was Maureen (McIntyre), the founder of the charity.  My first impression was that here is a woman who inspires and impresses me more than anyone I’ve met. Industrious, energetic, compassionate, she is one of life’s doers and just makes things happen.

“You asked me what was different about Educate the Kids and I’d say that it’s right in your face and real. When you speak to these children it’s almost impossible not to develop a bond with them. I always ask, ‘tell me about your normal day’ and their response is always amazing and not infrequently harrowing. They know what starvation feels like and their attitudes and experience of life are just so different from ours. I recall once when we had some female kids and teachers staying with us and they were aghast because I was ironing my own shirts!

“I like the ethos of the charity. I am not personally religious, but I see what their religion brings and, equally importantly, how, irrespective of their beliefs, they integrate.  There is a lesson for the rest of the world here.  I can’t put my finger precisely on what it is, but I think it’s their sense of community that makes the difference.  They operate – live and work – in a way you imagine your grandparents would have done. They share the work; they are wee links in the chain and together they just get on with stuff. Brilliant – I wish we could do this better in our country.

“What can business bring?  Well, I think that for some businesses, CSR (Corporate Social Responsibility) is just a box-ticking/procurement-appeasing exercise.  Rather than CSR, I think businesses should aim for meaningful engagement and not just collecting money (important thought that is for many charities). In the case of Educate the Kids, business can play a role in getting the older kids into university. Currently, my firm sponsors teacher trainers and we’re going to provide a scholarship for one of the school students to go to university. This is where SME businesses could really add value. It costs only £1,200 a year for four years for a student to gain a degree in Kenya, but it produces something important and valuable – doctors, pilots, more teachers, etc.  These professions are the building blocks for communities.  It’s a medium-term investment in these kids’ futures, but there are thousands of UK SMEs in the £1M – £10M turnover range and £1,200 a year is nothing to most of them. We’re not talking about the teenagers we’d recognise here who sometimes think that the world owes them a living: in Kenya, they are so grateful that once they get an opportunity they embrace it wholeheartedly and won’t let you down.

“You asked if they would they make good recruiters for my firm.  I’d say yes, they’d be good at anything because of their attitude and willingness to learn in order, literally, to survive.  They welcome opportunity with open arms.  When you’ve starved yourself and seen how cheap life is amongst your fellow human beings then the only way is up.

“Finally, you asked what my elevator pitch to other businesses on behalf of Educate the Kids would be.  That’s simple: Educate the Kids means 800 children are alive today.  They feed them and educate them every day. Without this, some of them would not be alive. By giving money – all of which goes to the cause and none of which is spent on any admin or other services – you are helping save more lives and educate more of these amazingly lovely and deserving people.”