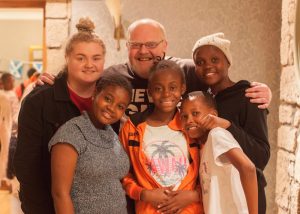 Jamie (Jimmy) Davis lives in Sauchie, near Alloa in central Scotland, but is originally from Newtonards in Northern Ireland. He has done a wide variety of things since leaving the army and moving to Scotland; working in hotels, running hotels, owning a chip shop and now, for the last six years, managing his own firm that works as a private contractor to Hermes, the distribution company.  Then one day, one of his own staff at Hermes, Annette McLeish, said, “have a look at this charity…”

“Annette explained all about Educate the Kids, how it only costs £11 a month to sponsor a child and how all the money goes to the kids and their teachers, with nothing at all being spent on admin and management.

“Well, I thought, £11 is less than half an hour’s work for me.  I met Maureen (the founder of the charity) and Yvonne, her daughter, and they said, ‘there is this wee boy, William, who needs help,’ so I sponsored him and then it transpired that he has a sister, Sacha, and no-one was sponsoring her, so I did that too.

“Although I’m separated, I am very family orientated, with two daughters and a son of my own. Two 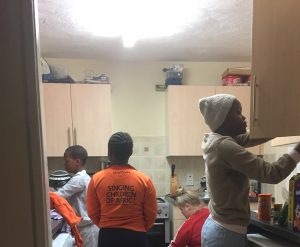 of them (the older girl and the boy) are at uni now, while my youngest is doing her Higher exams.  Although I’d been sponsoring these two kids, we obviously can’t see them very easily, but then Annette told me that some of the children were touring with the Singing Kids Tour and asked if I would be prepared to look after a few of them.

“It was a sunny, cold afternoon in Dunfermline when I met the children who were coming to stay with me.  When I saw their faces – their smiling faces – it just melted my heart.  And me, a tough, ex-Military Policeman – but when they came and hugged me, well, it’s been life-changing.

“There were three little girls and they were with us for over three weeks. They were so grateful to us: they all called me ‘Dad’ and I particularly remember when the eldest came downstairs, went into the kitchen and began to pick up my pots and pans.  I said, ‘what are you doing?’ and she said ‘I’m going to clean your pots.’  I replied, ‘you don’t have to,’ but she said, ‘I want to give you back something because you’ve looked after us so well.’  It meant so much for her to be able to do it.

“Whilst the children were here, I got speaking to them and also listened to them talking about their home and about how hard it is for them.  One day it was raining heavily and one of them said, ‘whenever it’s raining at home, everything gets wet.’ I asked what she meant, and she explained that she meant ‘wet inside, because water comes through our roof as it’s only made of grass, and sometimes the sides of our house fall down.’ I hadn’t realised they live in mud huts. One of the girls told me her mother can’t go to work as she’s got bad gums and teeth and is in a lot of pain and I just thought how lucky we are in our country with a system that l 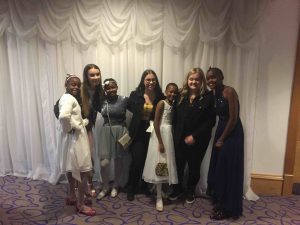 ooks after you. As a result, I subsequently decided that I would do more and I’m now helping some of the older children through High School with a view to them going to university. I’ve also given some money to help get the wee girl’s mother’s teeth sorted. Now she has sent me ‘before and after’ photos and sent a message saying, ‘my mum hasn’t smiled in years and you’ve made her smile.’  It cost me £80 but it means her mum can go out to work and she’s helping earn money for her family.

“Then the Singing Kids went to England and I missed the wee souls.  Emma, my younger daughter, can be a bit shy, but while the kids were here she took charge of everything, organising their snacks and helping in all sorts of ways.  Then one day she said ‘Dad, could I sponsor some children out of my pocket money?’  As it happened, I’d spoken to Maureen about sponsoring a teacher, so my daughter took over Sacha and William and I now sponsor a teacher. Rhiannon, my eldest daughter who sponsors another wee boy, named John, is a student geography teacher and Educate the Kids has changed her outlook as well. She has even used the experiences of the children she has met to help her own teaching.

“After a few weeks the kids came back from England. I remember asking them all sorts of questions, including, ‘what’s your bedroom like a home?’  They said, ‘we sleep on the floor,’ so I asked how big is your house and they said, ‘the size of your kitchen.’ ‘Where do you cook?’ I asked, and they said, ‘outside, when it’s dry, because we can’t afford electricity.’  They explained that there is no running water, which in turn explained to me why they kept turning my tap on and just looking at it. In Kenya, they go to the river for water.  They get up at the crack of dawn, help clean and look after each other and try to better their lives. And they do all this because Maureen and the charity give them a chance. It is exhilarating and infectious: my daughter brought some of her friends along to meet the children and now they are getting involved.

“On their last day, I drove to Manchester to see them off. I spent the last few hours at the airport with them before they went home. I had to turn away as I didn’t want them to see me crying. And me, a big tough Military Red Cap…

“Emma and I are going over to Kenya next May.  I can’t describe how much I’m looking forward to it.”