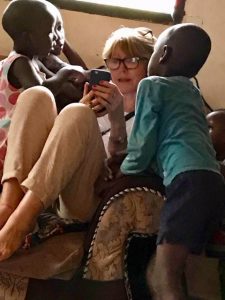 Joan Patterson lives in Cairneyhill, in Fife, Scotland. She’s from Belfast but married a Scot and has lived there for a long time now.  Her introduction to Educate the Kids came about around 2007/08, when a friend told her about a talk that Maureen, the charity’s founder, was going to give …

“I had been involved with the Children’s Panel (a voluntary organisation that works with children in legal settings) and so I had a background and an interest in helping kids, but I wasn’t prepared for quite how inspirational Maureen was that night.

As a result, I then sponsored a little girl and in 2010 I went to Kenya on a “lifestyle break.” I was away for three months and I learned a lot about the country and its government and, more importantly, about the school and what Educate the Kids does on the ground there.

“Then, like a lot of people, my circumstances changed and I went to Canada and stopped being a sponsor.  However, when I returned to the UK I picked up again with the girl I had sponsored previously. Her name is Mathoni Maasai and she is about to go to secondary school now. 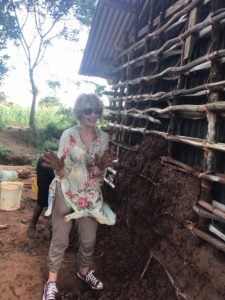 “I’ve also been to Kenya again: I went in July this year with Maureen and about 12 others. One thing I did notice is how much things have changed, largely for the better.  It was great to see the difference between 2010 and now. The coast is more developed, there are more buildings, the roads have improved and the atmosphere in the school is (as it always has been) very positive.

“There are so many inspirational stories that come out of the school. We all know and love the amazing Singing Kids tours, but when you consider that they have no professional training their harmonisation is staggering.  They are such loving people, always smiling, so I think the music is in them.  Despite that, we need to remember the poverty that is their daily routine.  They may be brilliant choristers, but don’t forget that some of these children walk six miles to get to school, starting at six in the morning. When they are there, they have maize porridge and then lunch and that’s all quite a few of them have to eat in the whole day.

“Virtually everything they have has been given to them by Educate the Kids.  It’s the support that all you people reading this provide that makes it happen, and I think you should all be proud of that and do even more to encourage others to get involved. 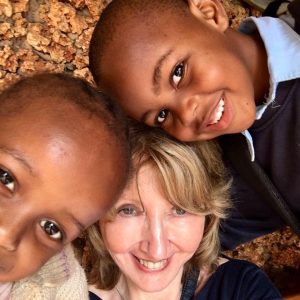 “Because this charity specialises in one small area of Kenya, specifically the school itself and those villages north of Mombasa, it has kept grounded and focused.  The other lovely thing is that there are no paid workers in the UK and this sets Educate the Kids aside from the big charities. They are businesses rather than charities and although they do a lot of good work, none of them, in my opinion, is a patch on Educate the Kids.

“I believe that this is because Educate the Kids is a community as well as a charity: givers really do get a lot back from their giving and they believe they – we – are all in it together. If you do get really involved you’ll find a network of like-minded people, some of whom even become friends. They – we – can all communicate with each other via social media, the website and, of course, we all love those stupendous, smiling choristers who make up the Singing Kids of Africa.  But if you just want to send off your £11 or more very month, then that’s fine too.

“I have seen this for myself.  This year, I’m taking in three children when they come on the tour. I know what they eat in Kenya, but of course it’s not always easy to find the food they like, so I asked the Educate the Kids community – all those who have done this for years – and discovered that they like bread and eggs and especially chicken fried rice – and they lovechicken and chips. So that’s that sorted!

“If you’ve not seen the Singing Kids then I’d almost beg you make the effort to do so.  You can see the “Tour Dates” (they really should get Tour T-Shirts with all the dates and venues, like rock bands!) on the website and there are still a few dates left.  It costs buttons to go and see them and if you are as inspired as I was then I hope you will be moved to spend a little money and help educate even more of these amazing children.”