make a donation
They are not different; they are the same – and deserve our love
30 Sep 19
share this article

Sharon Merrill lives in Minneapolis.  She has lived and/or worked (as a teacher) in a number of places around the world, including Taiwan, Turkey, Japan and England.  It was while she was in England a few years ago that she heard about the charity Educate the Kids. She’d always wanted to go to Africa…

“I’d planned to work for an NGO or do something like that, so the chance to go to Kenya and do some work with Educate the Kids came at the right time. I just bought a ticket, knowing there was something I could do but not quite sure what it would be.  Then I arrived at the Educate the Kids school…

“I had previously taught every grade in the States and been to less-developed countries and in schools overseas, but I had never seen a school surrounded by such poverty. However, from the moment I stepped over the threshold I was bowled over by their joy and friendliness.

“I think we tend to forget that for them this level of poverty is all they have experienced, so although it looks strange to us it’s how normal people live as far as they are concerned.  That said, they understand that going to the school and getting an education is a way to do things better and give them a chance to escape their poverty.

“One thing I quickly noticed is how much the kids look after each other.  One girl had broken her shoe and lots of other children gathered round to help her. They didn’t go to find a teacher, they tried to figure out themselves how to help their friend.  Here, in the States, most kids wouldn’t have noticed someone with a broken shoe. 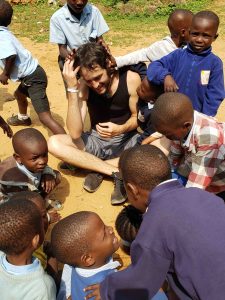 “You asked, ‘how can we learn from this?’  Well, I think that going to Kenya to work at the school improves one’s sense of community.  You can see this in the way all those who go out to help work together and how the experience changes them. For example, this summer, I took my friend’s 18-year old son to Kenya and it was interesting to watch this teenage boy (pictured) become almost like a father to these Kenyan kids.

“You ask if the American approach to charity is the same as the UK. Americans are becoming more aware of how many dollars charities spend on their own staff, marketing and admin rather than on the actual work of the charity. I think that’s the same in the UK, but the one big difference here is that giving to US charities is tax deductible but giving to overseas ones is not. Getting US registration for the charity will mean that Americans can claim back their tax on donations to Educate the Kids. I’m a lawyer and I’m working with Maureen (the founder of the charity) to try to sort this out.

“I’ve seen ads on TV for charities that are similar to Educate the Kids, but which spend far more on admin and overheads (not to mention TV ads!).  I tell friends in the US – “Look how we’re doing this – look what Maureen and Yvonne (Maureen’s daughter) do, it’s their money they spend, there is not a cent spent on admin 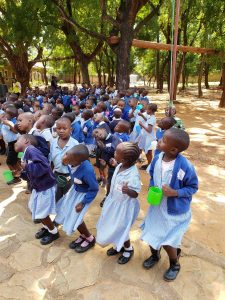 or marketing, it’s all done by volunteers.  The fact that people will invest their own money to go and do great work in Kenya is amazing. I don’t know any other charitable organization that says, ‘come and spend your money and we’ll let you help us!”  I think this approach really will interest a lot of Americans and that we can get more of them interested in becoming involved and sponsoring students.

“It’s different from anything I know here but I am convinced there are others in the US who would join me if they knew just how great this charity is and how important it is to the children in Kenya. When I speak to my friends here, I tell them that Kenyans are just like us.  Although they live in a different place and look different, they are just like us, they play the same games, the mums love their kids and, despite the enormous differences in wealth, the greatest thing about Educate the Kids is seeing what we all have in common. Rather than saying ‘they are different and because of that are deserving of our charity,’ we should say ‘they are the same as us and therefore deserving of our love.”