make a donation
You’ve seen Comic Relief? Nothing prepares you for the real thing.
15 Oct 19
share this article 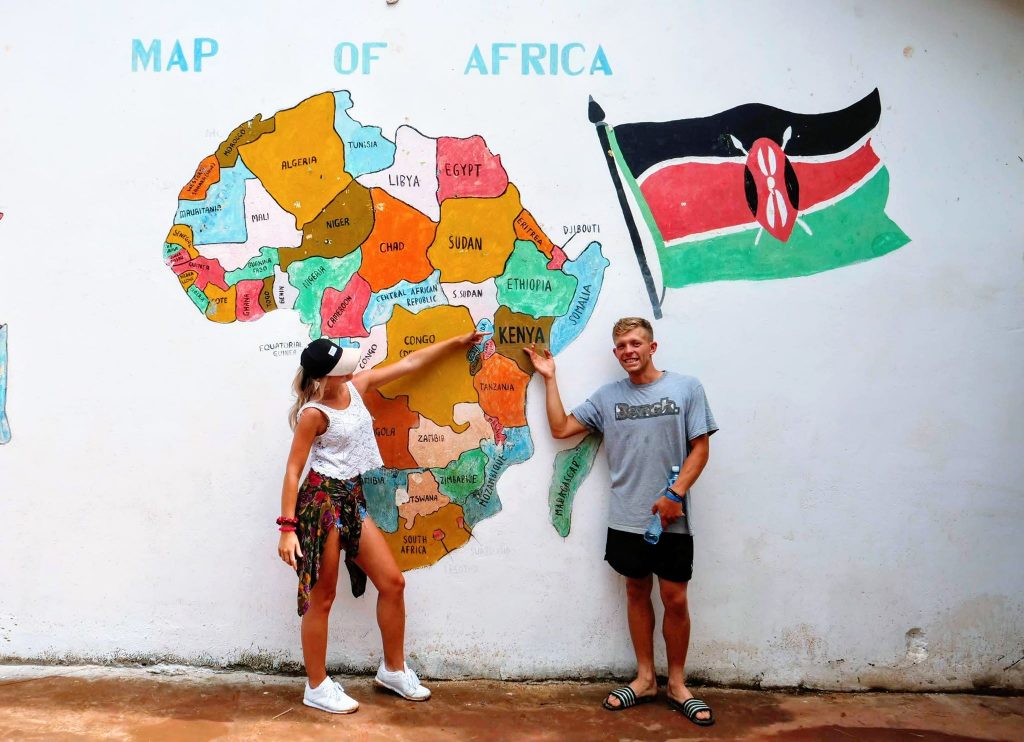 Charlotte and Cameron also explained that they were supporters of Educate the Kids, but that they stay in a hotel in Kenya so Lauren and Ben could stay there too and see the sights, go on safari and also, if they wanted, visit “this school that we support.”  As Lauren and Ben explained to me, that was the start of a journey of discovery.

“It was the first time we’d been to Kenya and we didn’t realise what we were going to see when we got there.

“We did do all the safari things that tourists do in Kenya, but we also went, just once, to see the school with Cameron 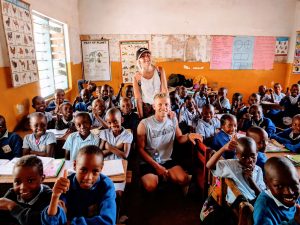 and Charlotte. Our first impressions were that we could not believe how happy and inviting everyone was. If you go into a school in England you feel awkward and out of place.  This was so-o-o different.  It was like nothing we had experienced before.

“We went again last year.  This time, we went to the school several times.   There had had been a lot of rain and we saw this house that had fallen down. We couldn’t believe people were still living in it. We were invited in and found a single mum, with four kids and she had also taken in an orphan child.  All of them had only one broken piece of foam on which they slept.  It made me (Lauren) tear up.

“We sponsor a boy now and we went to see him at his house, where a family of four share a mattress and they can’t afford the electricity bill.

“It’s shocking. Every year, people watch Comic Relief, but it’s not the same as being there.  People are inured to it on TV and sometimes I wonder if we become inured to it all and the way it is presented with music and crying kids just to tug at our heart-strings, when in reality, when you see real poverty first-hand, it is worse than anything you see on TV, simply because it’s raw and real.

That said, these families in Kenya may be very poor 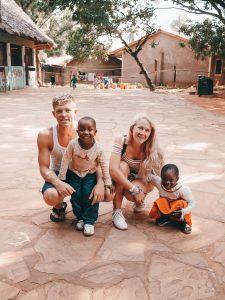 but amazingly they are still happy. Here, in the West, we have the technology to be super-connected 24/7, but in Kenya, without having this technology (it’s hard to have an iPhone if you can’t afford electricity!) they are far more connected and happy than we are, despite all the “riches” we have.

“Why can’t we be like them?  It has a lot to do with our phones, and social media (said Ben) … they are a community and have to rely on each other. They all say hello and speak to everyone.  Yet as soon as we got back to England, we got on the train from the airport to go home and no-one talks and everyone is too scared to look at each other. You feel alone here, but out in Kenya, in the village, you are never alone.

What is also amazing is that they look after everyone before themselves.  Abdul, who is the boy we sponsor, was sharing his food out. Lauren had a flapjack in her bag and gave it to him. He took it around the corner so we followed and there were three other kids there. Abdul gave a bit of the flapjack to each of his friends before he had a piece. We asked the people in the school why and how this is and their answer was simple – ‘We teach them how to love and how to share.’ In comparison, I think we are much more selfish in the UK.

“You asked what surprised us.  I (Ben) was surprised by how desperate the kids are to be at school and it makes me realise how much I didn’t like my school education and I could wish I could start again.

“I (Lauren) saw some young boys killing a black mamba (a very deadly snake) in the kindergarten.  A lot of people in the UK might go ‘oh, that’s cruel’, but in Kenya they all get taught as kids how to kill snakes. Otherwise, the snake might well kill one of them.  I feel like there is so much to say here but not enough space to tell you all the amazing things we have through being involved with Educate the Kids. It’s hard to put into words. There is a goodness that shines – out of each and every one of them.  I’d love more people to have the chance to do as we did – to get involved and discover these brilliant, incredibly poor but incredibly warm and vital people – and help them educate themselves out of their poverty. 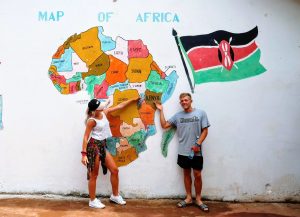 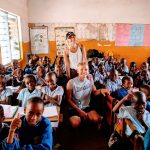